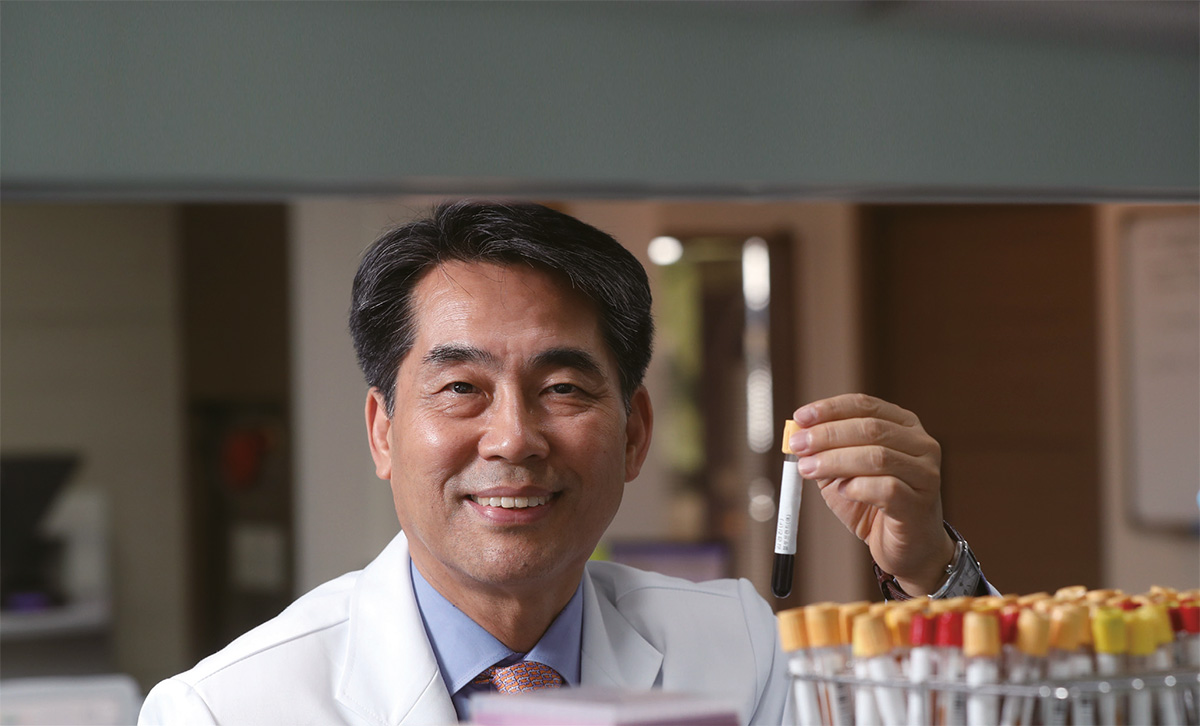 "It started its business as a curiosity and expectation. Looked curious whether that is what my research applications itgetda can contribute to social expectations also fell, "consideration was severe. It started business in 2001 and began raising revenues until 2014, the last 13 years. But he has re curious and looking forward to the next study.

Cells make up our body is made up of dozens of ten thousand kinds of proteins. It means that there is a change in a particular protein in the body if it took certain diseases. In pathology academics to study the causes and course of the disease occurs from the mid-20th century, compared to the normal protein and the protein of patients with certain diseases has studied the differences in protein created by this disease. Recent analysis by utilizing this technique a small amount of blood, in vitro diagnostics market, to examine the various diseases are booming. Of businessmen of the world's largest healthcare Swiss Roche (Roche), United States of Abbott (Abbott) also jumped in vitro diagnostics market executive jaekteu Sciences (Exact Sciences) and Vermillion (Vermillion), the United Kingdom onkeu immunity (Oncimmune) of the United States Although venture company is in vitro diagnostic company with a solid technical strength. But all of these companies have a single inspection technique-oriented cancer.

Korea Bio infrastructure is analyzed comparing the specific protein in the blood of 19 of lung cancer, liver cancer, gastric cancer inspectors 6 to measure the risk of the onset of cancer 'smart Cancer Screening (all in vitro diagnostic test indicators)' company. It takes a week until blood results after notice, the accuracy is slightly different from an average of 90 percent each arm. In vitro diagnostics market, where larger-scale 60 trillion won with the skills to diagnose multiple cancer markers to complex rather than a single marker at a time is the only biotechnology infrastructure.

After a week to inform sampling results, the average accuracy of 90%

Situated in Seoul conference on bio infrastructure Yeongeon I met with representatives Transactions (64). He is studying the characteristics of the cancer cells by Seoul National University professor of pathology and founded the company. "If you identify the proteins characteristic of cancer patients and comparative analysis of the subject protein I thought they could find cancer early. Will my studies in the laboratory can be applied what looked like a real curiosity is also going to contribute to the social expectations of my ideas while I was there. "

Representative Kim started the company in 2001 to 250 million won. Teaching and friends around the botaetda as many as tens of millions of won from 10 million won to the ideas of Kim representatives. Staff consists of five basic science researchers. What is heard talking about 'the management and the long distance from Seoul National People', he combined research and management. More family it 's not telling his wife and daughter thought it only as "a little more professionally than one study.

Not less than two years, not fellow professors have returned to the day job. "There was no guarantee that a good business is a good idea to understand that there are no reasons to dare every stable research environment. But my idea I wanted you responsible, "said CEO Kim raise money by selling their houses and land. Never catch up to 10 months salary, but no one was gone just none. Dwaetjiman financial difficulties to continue studies were continued. By 2007 compared to 3,000 cancer patients and normal protein protein 4200 had agreed to provide information at Seoul National University Hospital, it analyzed and found more than 200 specific proteins. In this process, proteins as well as cancer cells are found also created a unique variation of the protein only in patients with cancer. Protein can compare to consider the contribution of each protein and inspection fees will add 19 pieces went. Surgery and treatment, except for Simplified and thyroid cancer has a high incidence 6 to be inspected.

The next challenge the accuracy of the test. "It was more important to create an algorithm to compare the cancer patients and healthy subjects, analysis of the protein. Professor Kim Yong-dae I met by chance at a critical moment, "Seoul National University professor Kim Yong-dae statistics and research in bio-statistics, the United States had joined the interest in the study of CEO Kim. Representative Kim said, "Professor Kim Yong-dae is joined to analyze the correlation between the protein and 6 cancers were 19 reinforcing the existing algorithms, increased inspection accuracy," he said, "I think soon build a name for this algorithm."

Transactions representative said, "Thanks be to examine the six cancer cases at once unique integrative thinking in the East." In the United States and other Western look to check each of the cancer, such as lung cancer and gastric cancer and other diseases with a single protein in cancer, CEO Kim is thought that in the same category or lung cancer or stomach cancer. CEO Kim is "accuracy of existing single-cancer blood test is known as 50-60% and onkeu immunity, including in vitro diagnostics UK companies to check the executive jaekteu Science and lung cancer in the United States to examine the colon can check one kinds Amman "he said.

A few years ago a friend of Kim had hung the phone representative. "Lung cancer yiraneunde, I heard that a blood test for cancer. I want to receive a check. "Come to test the probability of cancer suggests that almost no results. Find a friend to the hospital again I had a CT scan, "likely still amil" I heard from the doctor is saying. Ahead of the biopsy came back to Kim representatives. He was perplexed. Because too came out low probability. Friends went to the hospital again had a biopsy, CT scan before I heard the doctor say the unexpected. "Inflammation on nothing. The shades seemed to cancer disappeared. It was not cancer. "Kim and staff representatives have been more confident in the accuracy test.

Skills and interest grew up and went around checking the accuracy together. Only last year, it has attracted government agencies and companies, 180 billion won from private investment. In 2012, it received the certification from the Department of Health and Human Services through the Health Technology protein combinations such as lung cancer were 20 patents in Korea and the United States, stomach cancer, colon cancer also registered so far. During the study period, the SCI-level papers were listed more than 210 pieces. Nyeonen also started to generate revenue to 201.4 billion won nyeonen cancer screening 6, 2015 recorded 15 million. All are expected to grow even more than doubled. The US, China and Dubai businesses while having an interest employee increased by 40 people. Recently, the first two types of protein found even new forms of the world. CEO Kim said, "This will take time to take advantage of the clinical pretty".

Recently the medical profession is changing the paradigm centered on the prevention, diagnosis treatment center. Representative Kim "Generally, if you find groups 1 and 2 of lung cancer or liver cancer decreases to less than 60-70% survival rate of about 15% is 3,4 Guillen" and "to find, even in the early development of medical technologies that matter it is important, "he said. Following adding that "short, simple procedure that will be the indicator of in vitro diagnostic tests are more common strengths."

Kim representatives meet next year tenure professors are excited about the new study. "As the cancer grows an aging society. The cancer tumor cells to the current size of the picture we can see the machine should be 1cm. Currently we combine the blood circulation and new technologies to extract the tumor cells will have to find a better metastasis and recurrence of cancer early. "